How to Make Homemade Sour Cream How do you make sour cream so it’s the pure, cultured treat it used to be? It’s not hard and it’s very rewarding.

Though I’ve been making sour cream for a couple of years, my concern over ingredients began a decade ago. Our primary care doctor prescribed a gluten-free diet to help my son’s autism. Going gluten-free didn’t take long since I grew up on a farm and cooked everything from scratch. But though we drank raw milk, we rarely transformed our dairy into something better. All my sour cream had come from the store.

I learned catch phrases and keywords indicating ingredients that might harm my son. Modified food starch is one. If the label doesn’t indicate whether the starch comes from tapioca or corn, it probably derives from wheat. Hence, gluten. Most sour creams use modified food starch or cornstarch as a thickener. The only safe products I found were Mexican or Salvadoran style, thick and runny at the same time, pleasantly tangy. I couldn’t put a marshmallow-sized glop on my tacos but I could drizzle a much better product.

Later, when my son transitioned off his diet, I encountered another food problem: my sister is allergic to corn. So if the label indicates starches come from wheat, she’s probably safe. But cornstarch makes her ill.

Both my son and sister can have Hispanic creams … unless the bottle is made from corn.

The best alternative for those who cannot handle additives is culturing sour cream at home. Other reasons include owning dairy animals and needing uses for both milk and cream. Using it in traditional recipes which need the acidity from fermentation and the smooth texture. And, overall, because it takes much better.

How to Make Sour Cream From Scratch

First, obtain heavy whipping cream. It doesn’t matter whether you purchase it in a carton or skim it off a freshly cooled batch of milk; both work fine. You will have better thickening if you use fresh, raw cream or pasteurized, though it’s difficult to find this in stores. If you can’t find fresh or pasteurized cream, ultra-pasteurized will still work but won’t get as thick. Ultra-pasteurized dairy products cannot be used for cheesemaking but will still work for yogurt, buttermilk, or learning how to make butter.

Now you need the culture. Some people use store-bought sour cream, as when learning how to make yogurt from scratch, but most products in the dairy case are not actually cultured. The right product will say, “Ingredients: Grade A cultured cream.” If it contains starch, stabilizers, sodium phosphate, carrageenan or other additives, it will not work.

A second method involves mixing apple cider vinegar with cream then letting it ferment overnight. This sours it, thickens as proteins curdle, and spreads probiotics from the vinegar through the cream. Be sure to use true apple cider vinegar containing the mother, not the clear stuff sold in gallon jars. That is actually flavored distilled vinegar.

Ricki Carroll’s book Home Cheese Making contains instructions for all products sold through the company. It gives specific steps and temperatures for hard and soft cheeses. But though it instructs how to make sour cream, purchasing the book for this purpose alone isn’t necessary.

What is a dairy culture? It’s a collection of probiotics necessary to ripen milk, increase acidity, curdle proteins and extend shelf life. Cultures have been used for millennia to remove lactose or turn milk into something that can travel a long time in unfavorable conditions.

And what are probiotics? They’re good bacteria. The same conditions which grow good bacteria also grow the bad ones. This is why it’s important to purchase pasteurized cream unless you’re sure of the cleanliness of your raw milk source. The ripening process can also grow bad bacteria that exists in the milk.

But if you use clean raw milk or pasteurized product, you’re growing so many good bacteria that you push out the few bad ones. This is another reason to use a powdered dairy starter instead of an existing store-bought product. If the culture is strong enough, ripening is the result of the clean starter instead of ambient bacteria from the surrounding environment.

Bacteria grow best in a warm environment. 75 to 120 degrees is optimal. Too much hotter and probiotics will die. Too cold and they won’t grow.

So How Do You Make Sour Cream?

Right. Let’s get to that.

Mason jars work well for this process because most recipes involve measurements in pints or quarts. The cream doesn’t expand during ripening. You can see the thickness through clear glass. The lid fits loose or snug. And canning jars distribute heat well.

Get your cream. Heat it to optimal temperature. This can be done by leaving it on the counter until it reaches room temperature, if your house is warm enough, or placing a bottle of cream inside a larger pot of hot water. Let the cream rise to 70-80 degrees. Now add the culture. Mix it in.

Now cover the cream with a loose lid. Wrap it in a couple of towels to insulate the heat. Let it sit 12 hours for a mild and runnier cream, 24 for a stronger flavor. When you open the jar, you’ll notice it’s thicker and might be off-white. And it will smell like sour cream.

Refrigerate. Don’t forget that, or bacteria will continue to build. And enjoy the sour cream soon. Unlike store-bought products full of preservatives, homemade sour cream will go bad within a few weeks. If you’re worried whether it’s still good, open and sniff. If it smells “funny,” feed it to chickens. But if you exhale, pull back, and blink your watering eyes, discard the remainder and start completely from scratch for your next batch. 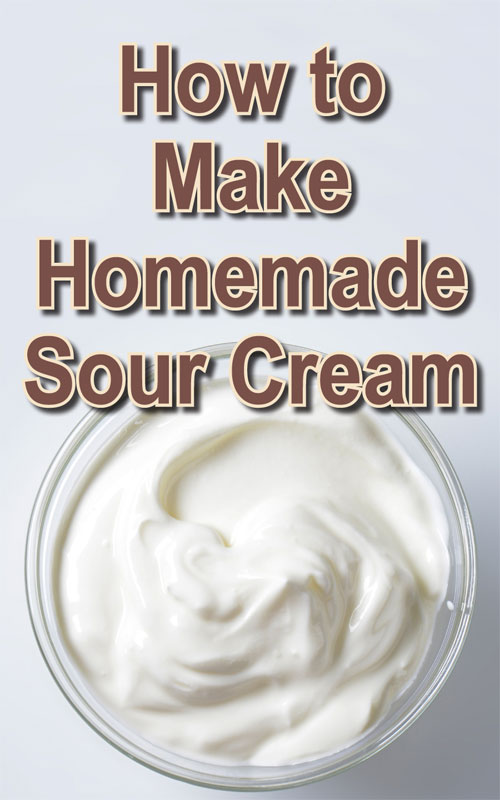 How to Use Sour Cream

What do you do with it now? Obviously, dollop on scrambled eggs or tacos. Add sugar and a little vanilla extract then whip into a cultured whipped cream, excellent for crepes. Use for dressings and dips. Or turn into butter and buttermilk, harnessing the same probiotics to make fluffy biscuits.

Have you tried this process? How do you make sour cream for your family? And how do you use the finished product?