Getting Started with Meat Goat Farming 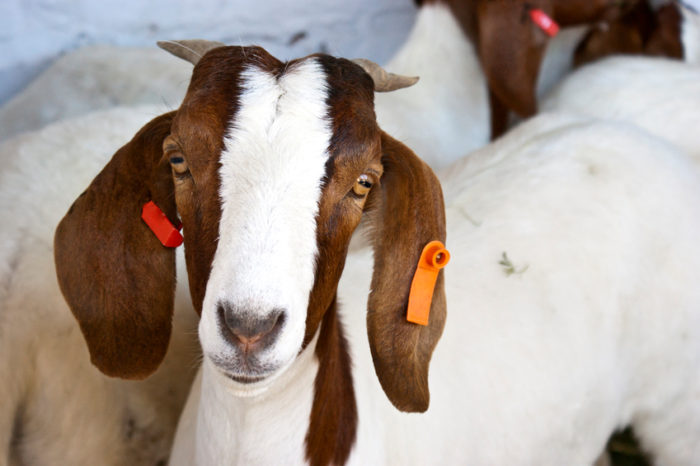 Are you interested in meat goat farming? There’s a lot of published advice out there. But if you want the best direction, ask someone with a successful track record.

I have been involved in raising goats for profit for just 14 years but came from a farming family, raising livestock since I was a small child. My goat operation currently has 20 head of Boer does, consisting of commercial, percentage, and full-blooded does, and a 100% full-blooded buck.

As did most people, we started with just one goat, a Boer doe kid that our son wanted for a 4-H project. Our local county fair had started a class on meat goat farming, and like most kids he wanted to try it, so we went shopping for a Boer goat. Now mind you, this was back in the day before there was really any internet, so a lot of phone calls were made and a lot of miles were driven while looking for one. We settled on a doeling that was unregistered but a purebred. He ended up showing in the market class since there was no breeding class at that time. That doe won Grand Champion Meat Goat against all the wethers. And 2 months latter we went to our first ABGA-sanctioned commercial show and won Champion Commercial Jr. Breeding Doe.

Kidding season is full of excitement and adoration. But what do you do after the baby is born? Premature kids, babies that can’t suckle, and sick animals require immediate care. Even if the kids are healthy and their mothers willingly accept and care for them, how do you know when to wean the kids and when it’s time to separate bucklings from breeding-age does? Answers to these questions and much more inside!

And so we were hooked. That doe went on to be one of the best does we ever had; we have retained every daughter she had and have granddaughters also in our herd.

I like to say we got where we are today on a shoestring potato chip budget. At that first open show, we were fortunate to have a gentleman introduce himself and offer to mentor us in this adventure. Kenneth Gilchrist and he had raised just about every known breed of goat. He had raised Boer goats since they first came to the United States in 1993. I took his word as gospel, for he had done, seen, and experienced it all.

I have a mixed herd of does and therefore can market to any avenue I desire, but it takes a lot of extra hard work. Consider a few things before jumping into meat goat farming:

What type of land do you have? Goats prefer brush and scrub, since they are browsers, but can be raised on pastures as well. Pasture requires more management practices like worming, rotational grazing, if need be, and providing a wide range of grasses for feed. Goats can and will thrive in a feed lot/dry lot situation but will require more intensive management practices such as worming, being fed a complete feed made especially for goats, being fed some sort of roughage (grass hay, alfalfa).

Also, look at housing. In the summer, goats often sleep under the stars but they will need some sort of shelter to get out of weather such as rain. Buildings can be anything from small huts to big barns; just be sure to provide enough shelter for all your goats. And depending on what time of year you plan on kidding the does out, will dictates what kind of birthing shelter is needed. We will talk more in depth, at a later time, about shelters.

Fencing: Woven wire, cattle panels, and chain link work, as well as most other fencing types, but a producer cannot put up enough strands of barbed wire to keep goats in. Remember that goats will stick their heads through any opening and will catch their horns on the way back out. Always be on the lookout for goats stuck in your fencing. And never stake a goat because they are vulnerable if attacked. After covering the basics of caring for goats, it’s time to assemble the herd. One doe can birth one to six kids; twins are the most common. A lot of people, myself included, breed a young doe at one-and-a-half years old so she will kid when she is just turning two. This allows her to be larger and more mature.

To find the ideal meat goat, you can place an ad or look through Craigslist; Facebook is one of the most modern places to look for a doe. Check any of the numerous Boer goat sales held nationally, throughout the year. Avoid sale barns unless you know the seller and breeder, because that’s where everyone sells their junk and culls for market meat goat farming. They’re also where killer/meat buyers purchase theirs for the slaughterhouses. Now, I am not saying, “never buy a goat from a sale barn,” but be prepared to get what you paid for and someone else’s cull or trouble. Steer clear of older does that have never kidded, or you may risk buying a doe that is unable to breed. If the doe has kidded before, inquire whether she had multiple kids, Twins are great but triplets and quads require supplemental feeding, pulling kids and grafting onto another doe, or raising bottle babies. Did she have an easy birthing process? A doe that had one hard kidding, such as breech or tangled kids, won’t necessarily repeat this scenario, but you should be aware of it. Does she have mothering instincts, cleans her kids in a timely matter, is gentle around her kids, and tries to get them to nurse on their own? A doe that will nurse anyone’s kids is almost worth her weight in gold. Ask if the doe was easy to breed and if she settled or had to be rebred repeatedly, since does that do not settle may be cystic. Does she keep her condition up even while nursing, or does she require more feed than your other does receive? (Remember that nursing triplets or quads requires more feed to produce necessary milk.) Ask what the doe’s kids weighed at weaning, if the owner even weighs the kids, to determine what type of milker she is and how well her kids grew. When buying a young doe, these questions cannot be answered, but try to ask about her mother. No matter where you buy a doe, or what age, make sure she is healthy, has a good hair coat, hooves are not over grown, is not too thin or too fat. Look for a doe that has good size of a hoof, good size of bone and is nicely balanced. If she is a young doe, try to imagine what she would look like grown up. If she is older, ask about her daughters: are they in a herd? Have they kidded and were there any problems? I also never buy a doe that is within 30 days of kidding, or has kidded less than 30 days ago, because neither the doe nor the kids have immunity to my place and risk the chance of having sick goats or even worse goats dying.

Ultimately, you are the one that has to look at her every day; so, if you like her, that’s what counts. I have some pretty ugly does, but they sure do reproduce.

One last point about raising meat goats: You need access to a buck. I recommend a Boer buck, because they will produce a meatier kid. If you use a crossbred Boer buck, there is a chance that the kids will take after the other breed and not the Boer side. Having your own buck makes it easier to tell when the doe is in heat, as the doe will flag her tail and the buck will urinate on his beard and front legs and will talk (blubber) to the doe. You can breed whenever you want to, without paying a stud fee to someone else. On the downside, a buck requires extra-strong fencing and a separate pen when they are not running with your does. Bucks can get aggressive and will continually test the limits with you and, as with any adult male animal, they need to be handled with care. Some bucks are very calm, non-aggressive and easy to handle, but I still wouldn’t turn my back to them.

Getting started with meat goat farming can be economical and an enjoyable experience, if you take the time to prepare for goat ownership and select your does and a buck.

This is part one of a series about meat goat farming. Stay tuned for more advice from Curt Rush, such as breeding and nutrition, dealing with health issues, and marketing meat goats for profit.

My name is Curt Rush and my wife and I have been raising meat goats/Boer goats for 14 years, starting with commercial does and a commercial buck. We built our herd up to a mixture of both commercial and registered does and only use a 100% registered buck. We sell wethers to local 4-H and FFA kids and sell both commercial and registered does for both the show ring and for breeding stock. I judge commercial goat shows and county fairs and will soon be going to the ABGA Judges school, in hopes of becoming a Registered Sanctioned Judge. I also own in partnership with Dr. Chris Sparks, who has a PHD in Animal Nutrition and Goat and Sheep Feed Business.

2 thoughts on “Getting Started with Meat Goat Farming”